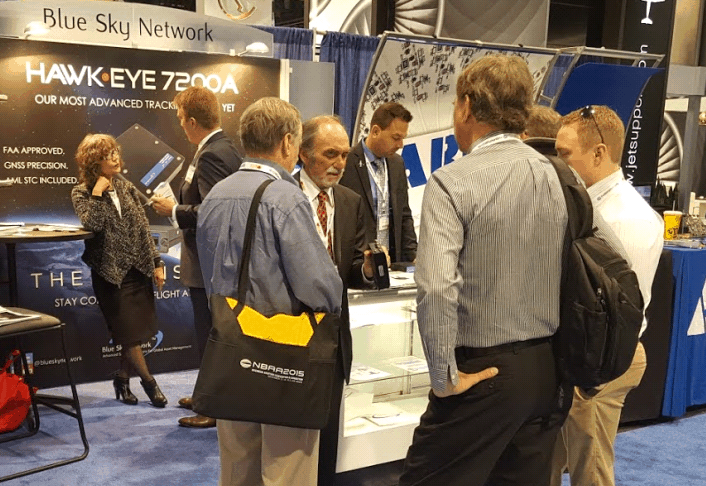 Can you briefly explain your SkyRouter technology? Who is it targeted toward in the aviation industry? What are its applications?

We were early adopters of Iridium for aviation and we’ve been exploiting that network now for 14 years. In 2003 Iridium, which was previously just a voice channel, modified their satellites to be able to handle packets of data, and this was authored by Boeing, in concert with Iridium. Boeing is the operator of the satellite network.

This facilitated the ability to send small amounts of data over Iridium and in concert with that, we came up with this concept of position reporting. Truth be told, I was part of a company prior to BSN that tracked vessels, but not using Iridium, so I had a lot of experience in the arena of tracking.

The idea is obviously to bring safety to the forefront of aviation. Often you read about accidents that occur where they don’t know where the aircraft is located and the whole idea is to make the aircraft visible for those who care about it (predominantly the operators of the aircraft).

In 2003/2004 we developed tracking hardware. We, of course, were a tier one service partner of Iridium, and then we began the development of SkyRouter at that time because we really, at the end of the day, were a total solution provider and SkyRouter is one piece of this puzzle.

We generally, especially for the aviation industry, design and manufacture our own hardware for FAA certified products. We continue to evolve the hardware to maintain best-in-class standards and continue to execute improvements with SkyRouter, which is our back end portal. There are three pieces of the puzzle involved in our solution: the hardware, the air time (which is just the transport modality), and then the back end cloud-based portal, which is SkyRouter.

We’ve been doing this now for 10 years and we’ve gotten very good at it.

We have a multitude of developers who are consistently improving the product using our vision, as well as customer requests for new features. SkyRouter today is basically the back end cloud-based web portal accessible from any desktop. We also have provided and built a SkyRouter app for the IOS platform. SkyRouter’s technology was originally targeted toward the aviation industry, but now is appropriate for any remote portable device.

Anything you wanted to do with a two-way communication method on an aircraft is something you can do through SkyRouter. For example, you can re-parametize the device over the air, meaning that you can change the frequency of position reporting, you can automate take-off and landing messages; we have something in excess of 50 different events that you could tell the device to report to you when it occurs. There’s a whole bunch of features that are enabled through SkyRouter’s communication with the device which is all done over the air.

We have customers on all 7 continents, and as a result of that, we give them the ability to communicate with devices from the server without ever having to touch the device.

Who would you say this is targeted toward most?

Mainly fleet operators. Although it works with both fixed-wing and rotor, we really got our legs with the rotor business in the Gulf of Mexico. We understand there are 30,000 people who work in the Gulf of Mexico on the rigs, and they used to be transported on work boats, and it took a couple of days to get them out there. Taking them out there on helicopters, they found out, would be much more efficient. But because they flew very low and because there’s no radar coverage in the Gulf of Mexico, there were a number of accidents. The accidents were usually fatal, and no one knew where the helicopters were, so they’d have to launch significant search and rescue operations to find them. Contractors like Exxon, BP, Shell, and so forth, who were contracting with helicopter operators, found that it was both safer and more cost effective to track these helicopters in real time. That is where we really got launched.

Today, you probably couldn’t get on a helicopter in the Gulf of Mexico that isn’t being tracked in real time. This is where the critical mass of tracking started.

How do you find most operators are using the SkyRouter real-time streaming capabilities?

The solution is designed for people in the most remote areas – anybody, anywhere that’s not covered by ATC on a consistent basis. If a commercial airliner is flying over the North Atlantic most people think it is being tracked but the truth is it’s not being tracked, unless you have a tracking system on the aircraft. That’s how MH370 and Air France 447 got lost, because nobody knew where they were and it’s silly because it’s not that expensive. If you can put this on a helicopter in the Gulf of Mexico to fly people back and forth from a rig, you can certainly put this on a commercial aircraft.

Another example of how SkyRouter is being used is evident with the country of Mongolia which obviously can’t cover the entire country with air traffic control. So, in lieu of that, they bought the hardware for every aircraft in Mongolia. They have the operators pay the monthly charge, and the government pays for the hardware. So, they’re using our solution as a quasi-air traffic controlling system because they now know where these aircraft are and they can communicate with them either over a voice or a messaging channel in a two way manner. Where SkyRouter is used is in places where there’s virtually no air traffic control.

Why do you believe people are somewhat hesitant to equip with this type of technology?

The people at Malaysian Airlines would probably give anything now to have tracked MH370 because they would know where their plane is. It’s all derived by need.

The people in the Gulf of Mexico did this because they were losing people and they couldn’t get to them fast enough so they thought that maybe if they knew where they were, they would have the chance to save lives. I think the drive is safety, but what’s preventing them is probably the myth of cost; only it’s not that expensive. It’s really an illusion how expensive it is, in fact it’s ridiculously cheap. If you report your position every two minutes it costs you about $5 an hour to do this. I wouldn’t call that a lot of money.

Can you briefly explain the geo-fencing capabilities? How are operators, airlines or organizations putting this to use?

Geofencing is what in today’s semantics would be called virtual fencing. We create boundaries with latitudes and longitudes that the system can register. We have built a system where we allow our customers to create these geofences in the shape they want and they can track their aircraft to see whether they stay within the boundaries they’ve set.

As an example – our hardware used on trucks and other vehicles that are operated by a multi-national peacekeeping force in the Middle East. There are hundreds of these vehicles. The peacekeeping force monitors the border region between these two countries, but what happens is once they leave camp they don’t have any communication, or know where these vehicles are, so they need a method to be able to both communicate with them, and more importantly know where they are.

These areas of conflict keep changing so the geofences have to be very flexible. They wanted something even more sophisticated. They wanted us to be able to direct the device to autonomously change the firmware on the device so that when they were in a specific designated geofence that the vehicle would change its reporting frequency depending on the risk. When they went into high conflict areas (as defined by them) they wanted the vehicles to report more frequently because they wanted to know where they were more frequently. If they were in areas with lower risk, they could curtail the reporting frequency.

There were some regions they considered to be no-go zones. If that vehicle was ever in one of those areas that was a huge issue, either the vehicle had been stolen, or it had crossed a boundary that it wasn’t authorized to cross.

For all these reasons we created variable advanced reporting for our geofences. This is a very, very powerful, sophisticated system. It becomes more powerful when you can host the actual geo-fences on the device.

Right now any device can host up to 20 geofences, but that is going to change pretty radically with our new equipment.

Do aircraft have to be equipped with connectivity in order to stream tracking data?

This is a packet system, so we don’t really stream anything. The aircraft reports positions or events with specific frequency to the operator. An operator could also ping an aircraft for a position report and it would report back at this operator’s instruction. The degree of connectivity is up to the operators.

Today’s world is mobile, everybody is mobile, so it became important that people did not have to sit at their desk to use the information that SkyRouter provides. If you’re a fleet manager who is out to lunch and there is a problem with the aircraft, you want to be able to be notified and see SkyRouter and the information about the aircraft. In the near future, the SkyRouter app will be one you can operate as if you were sitting at a desktop.

I think the general public, personally, is going to demand that these aircraft are being tracked. Recently, an Indonesian aircraft with 49 people on board disappeared and they couldn’t find it for 24 hours. For sure people who had a chance of surviving were likely going to be in worse shape by the time they found them.

I think the public is going to mandate, for safety purposes more than anything else, that anything remote and mobile, that someone has to know where it is, and aircraft are certainly the first place to start. You don’t want to lose aircraft.

ICAO is working on a mandate that all airlines in the world be equipped with tracking equipment no later than 2020. This is something that is now on the forefront of commercial aviation. It has already been adapted widely by small operators, rotor and fixed wing in remote areas, but this is going to be something that is mandated more broadly by ICAO.