This is a business feature article from the San Diego Business Journal regarding Blue Sky Network’s solutions and why organizations such as the United Nations, Sikorsky, Chevron, and the U.S. Department of State rely on them for their operations around the world. 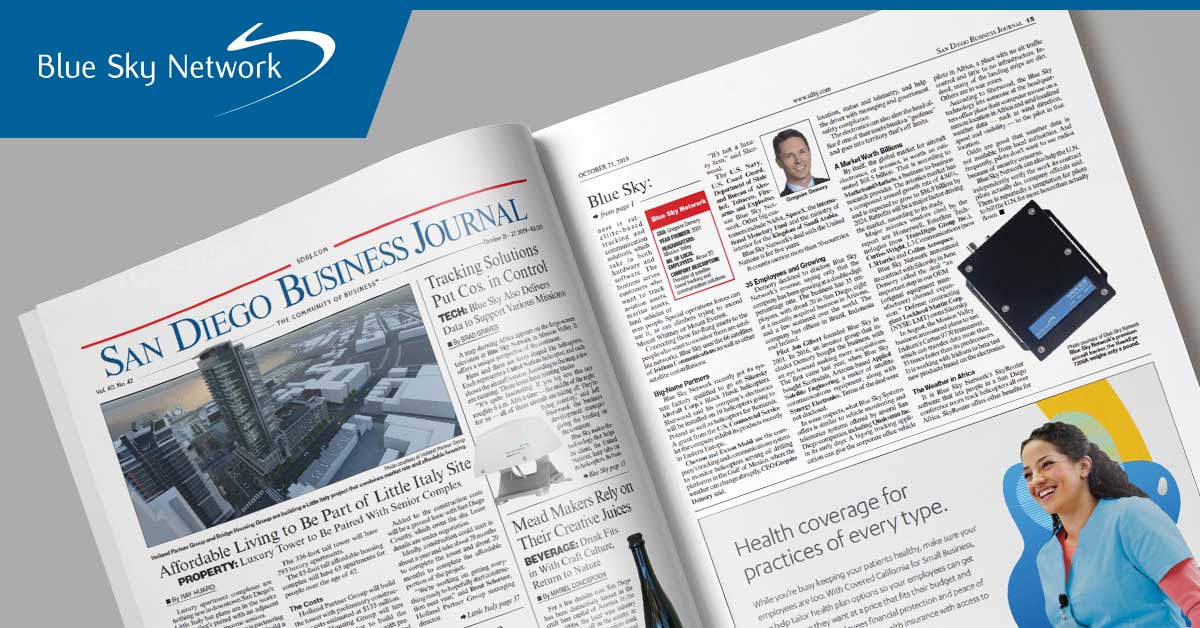 A map showing Africa appears on the large-screen television at Blue Sky Network in Mission Valley. It offers a unique perspective of the continent.

Here and there are icons shaped like helicopters. Each represents a United Nations helicopter, and each shows the aircraft’s status. According to the map, a few are running. Those icons have rotating blades.

“It’s quite fascinating. If you log into this (at) roughly 6 a.m. Africa time – the middle of the night for us – all of those aircraft are taking off. They’re flying nonstop,” said Jeff Sherwood, the business development manager giving the briefing on the company.

Blue Sky makes the technology that helps its client, the United Nations, keep tabs on its helicopters. Its business is satellite-based tracking and communication solutions, which take in both hardware and software. The business serves customers who want to track aviation assets, marine assets, land vehicles or even people. Special operations forces can use it, as can climbers trying to ascend Mount Whitney or Mount Everest.

Connecting those far-flung assets to the people who want to monitor them are satellite networks. Blue Sky uses the 66 satellites of Iridium Communications as well as other satellite constellations.

Blue Sky Network recently got its system factory qualified to go on Sikorsky Aircraft Corp.’s Black Hawk helicopters. Sherwood said his company’s electronics will be installed on 19 helicopters going to Poland as well as helicopters for Romania. A grant from the U.S. Commercial Service let the company exhibit its products recently in Eastern Europe.

Chevron and Exxon Mobil use the company’s tracking and communications system to monitor helicopters serving oil drilling platforms in the Gulf of Mexico, where the weather can change abruptly, CEO Gregoire Demory said.

The U.S. Navy, U.S. Coast Guard, Department of State, and Bureau of Alcohol, Tobacco, and Firearms and Explosives use Blue Sky Network. Other big customers include NASA, SpaceX, the International Monetary Fund and the ministry of interior for the Kingdom of Saudi Arabia.

Blue Sky Network’s deal with the United Nations is for five years.

It counts users in more than 50 countries.

Demory declined to disclose Blue Sky Network’s revenue, saying only that the company has been growing at a double-digit percentage rate. The business has 35 employees, with about 20 in San Diego, eight at a recently acquired business in Arizona, and a few scattered over the world. The company has offices in Brazil, Indonesia and Ireland.

Pilot Jon Gilbert founded Blue Sky in 2001. In 2016, an investor group that includes Demory bought the business, with an eye toward making more acquisitions. The first came last year, when Blue Sky bought Scottsdale, Arizona-based Applied Satellite Engineering, a maker of satellite communications equipment, along with Synergy Electronics. Terms of the deal were not disclosed.

In some respects, what Blue Sky systems offers is similar to vehicle monitoring and telematics systems offered by several San Diego companies, including Qualcomm Inc. in its early days. A big-rig trucking application can give the corporate office vehicle location, status and telemetry, and help the driver with messaging and government safety compliance.

The electronics can also alert the head office if one of their assets breaks a “geofence” and goes into territory that’s off limits.

A Market Worth Billions

By itself, the global market for aircraft electronics, or avionics, is worth an estimated $68.5 billion. That is according to MarketsandMarkets, a business-to-business research provider. The avionics market has a compound annual growth rate of 4.86%, and is expected to grow to $86.9 billion by 2024. Retrofits will be a major factor driving the market, according to its study.

In August, the Mission Valley business announced plans to test Iridium’s Certus 9770 transceiver, which can transfer data more than 35 times faster than its predecessors. It is working with Iridium to beta test new products based on the electronics.

The Weather in Africa

It is Blue Sky Network’s SkyRouter software that lets people in a San Diego conference room track helicopters all over Africa. SkyRouter offers other benefits for pilots in Africa, a place with no air traffic control and little to no infrastructure. Indeed, many of the landing strips are dirt. Others are in war zones.

According to Sherwood, the Blue Sky technology lets someone at the headquarters office place their computer mouse on a remote location in Africa and send localized weather data – such as wind direction, speed and visibility – to the pilot in that location.

Odds are good that weather data is not available from local authorities. And frequently, pilots don’t want to use radios because of security concerns.

Blue Sky Network can also help the U.N. independently verify the work its contract pilots actually do, company officials said. There is reportedly a temptation for pilots to bill the U.N. for more hours than actually flown.

For more information, press only: